Your brain is a jar of glitter.

This blog is for anyone who a) bought the Power of Now and didn’t finish it or b) knows mindfulness is a good idea but doesn’t do anything about it.

After I re-focused my mind on the mindfulness interview, I watched this short video about how children can deal with their emotions. One brilliant girl said, 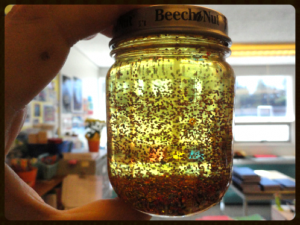 She’s right.
My brain is a jar of glitter.

I’ve recently added a few new adventures to my roster — master coach training, hip-hop dance class (what the what?) and some travel for both work and play. Although I’m looking forward to each adventure, my inner world can still feel chaotic. An abundance of glitter may look pretty, but it isn’t helpful to my brain jar. If I bring chaos to hip-hop class, my moves will suffer…more than usual.

I’m sure mindfulness offers dozens of health benefits, but I don’t really care. Instead, I’m focused on finding ways to be present for the people and experiences that matter most to me. I know that being present allows for richer, fuller moments and makes me feel more alive! Presence can be an access point to connection — with your peeps, nature, animals and life itself.

Mindfulness can start with a tiny thing. What sometimes soothes my mind are the simple lyrics from the song, Sing Along:

“Close your eyes and count to ten…
Let the world go on without you.”

Try it for ten seconds.
Imagine the glitter sinking to the bottom of your brain jar. Get your bearings. Reset. Come back. Drop in. Be present. Become the calm eye in the storm, the core of peace, the yellow submarine beneath the waves. You don’t have to stop thinking, but you can. The thoughts and emotions haven’t disappeared. They’ve only moved to the bottom of the jar so you can see clearly again. When you’re detached from your thoughts — even for a few seconds — you can begin to access peace, perspective and clarity.

In a New York Times article, The Cost of Daydreaming, Vivian Gornick wrote:

“The daydreaming, it seemed, had occupied more space than I’d ever imagined. It was as though a majority of my waking time had routinely been taken up with fantasizing, only a narrow portion of consciousness concentrated on the here and now.” Vivian wanted “to suppress the daydreaming; and lo and behold, it turned out that I could. Now, no sooner did the images start to form in my head than I found myself able to wipe them clean before they could take hold.”

If your daydreams aren’t the fun kind, please keep reading.

What To Do When A Glitter-Thought Hijacks Your Brain Jar:

Name the glitter-thought. “Man, I’m worried about the tires on my car.” Label the thought “worry” and then let it float back to the bottom of the jar. Once you name the thought, you’ve shifted from the “thinker” to the “observer”. This creates some distance between you and the thought — and you can relax a bit.

Boss it around. You’re fired! Get off my lawn. We broke up. Drop it like it’s hot. Blast the thought with your mental water pistol. Do whatever you can to weaken the glittery intruder.

Challenge it. What else is true? Tires aren’t supposed last forever. New tires are pretty. Think of as many other truths as possible. This can take you out of the negative emotion and help balance your perspective.

Reverse it. What is the exact opposite of this thought? My tires will never be bald! This idea may be silly and false, but you’re pushing your brain to solve a puzzle rather than reinforce the stressful glitter-thought. This can diffuse the emotion and perhaps bring some lightness to the situation.

Of course, you should still get those tires checked. Practicing mindfulness doesn’t mean you stop caring about things. Instead, you’re training your brain to settle into peace so you can move forward with clarity.

Like most everything else, mindfulness takes practice. I keep at it because I know how much it sucks when my brain drags me to a bad mental neighborhood. Remember, you are in charge of the glitter — so take the lead! Begin to direct your thinking (or non-thinking) and you can become The Master of Your Mind. Now THAT is power. 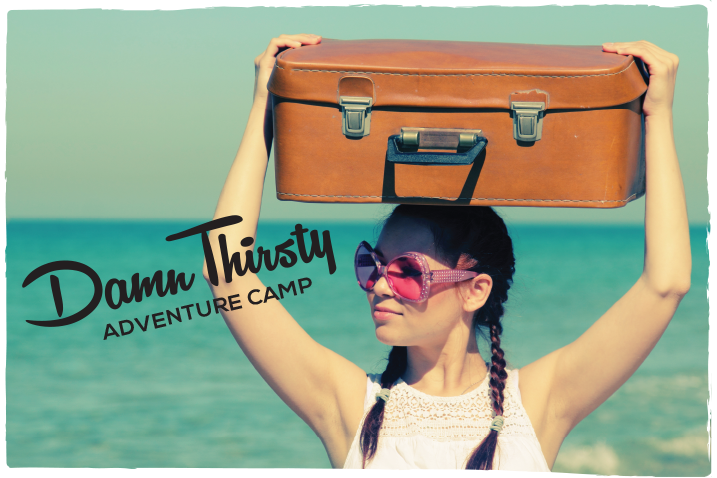 Are you thirsty for adventure? Do you need a splash of freedom + a shot of inspiration?

In a few weeks, Susan Honnell and I will share the dates + daring details for our next amped-up camp on California’s beautiful Central Coast!!

Click here to be notified when camp registration is open.

Join me for Thirsty Thursdays! 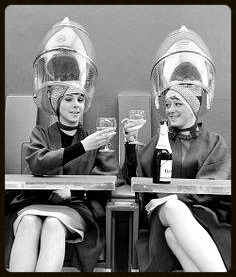 I’m hosting a FREE happy hour coaching call on the first Thursday of each month. The next round is scheduled for May 7 at 5p PT.
Belly up to the bar with your questions about life, career + relationships.

Just cruise over here for the details. Cheers!

This entry was posted in Adventure, Peace. Bookmark the permalink.